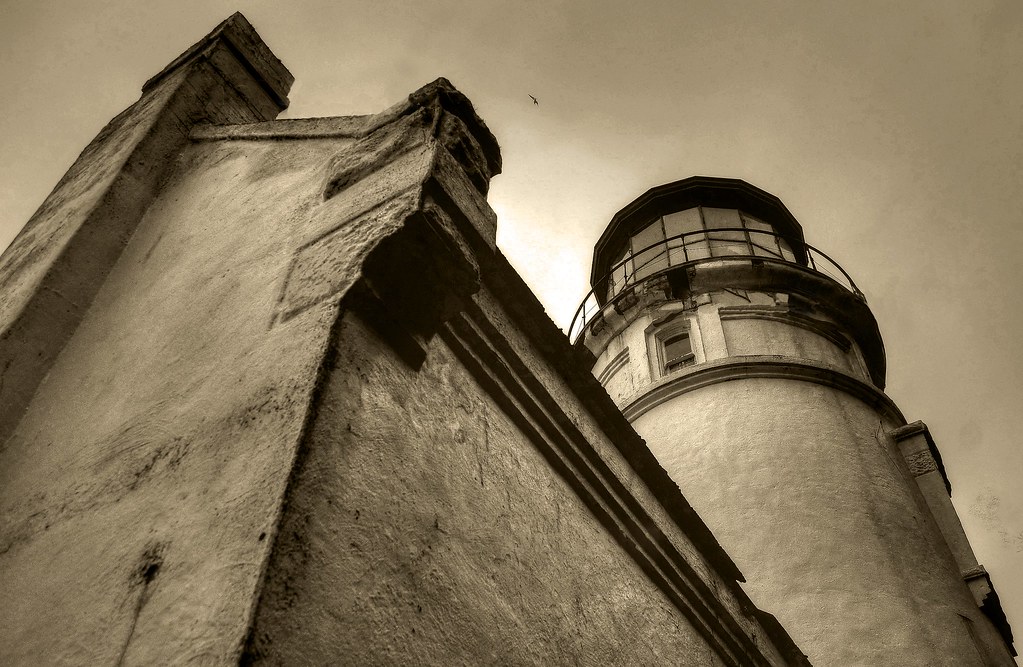 There is an Oregon Coast Ghost Story about Heceta Head and the Gray Lady.

Named for the Spanish sailor Don Bruno Heceta who discovered the location in 1755, the Heceta Head Lighthouse sits in a beautiful location on the coast of Oregon just north of Florence and is said to be the most photographed lighthouse in the United States.

Heceta Head Lighthouse serves as both a navigational aid to mariners and a popular tourist spot offering a 549-acre park of trails, viewpoints, tide pools, wildlife habitat and sandy beach formerly known as Devil's Elbow State Park. The area has since been renamed Heceta Head Lighthouse State Scenic Viewpoint known and includes the cove south of the lighthouse and the lighthouse itself.

The lighthouse tower itself is 56 feet tall and sits 205 feet above sea level. The Heceta Head Lighthouse is known to be the most powerful light on the Oregon coast. Its light can be seen 21 miles out to sea and is hampered only by the curvature of the earth. 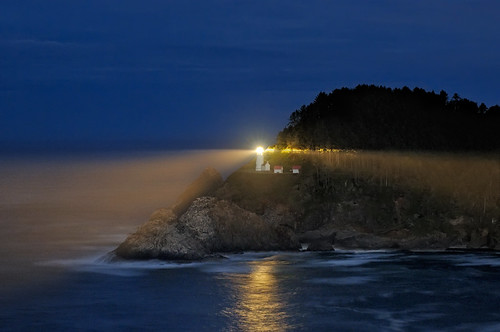 Construction of the lighthouse began in 1892. The project completion was hampered and delayed by the cliff-top site since nothing could be done until the roads were built in order for the supplies to be brought up to the site. Although the complete project was said to have taken about 5 years, the light itself was lit for the first time in March of 1894.

The original construction consisted of the lighthouse tower, a single building that served as a home for the head keeper, a duplex building where the two assistant keepers lived and several storage type buildings. The single building was demolished in 1940 and the lumber was used to build The Alpha-Bit Cafe in Mapleton, Oregon, about 14 miles east of the lighthouse. The lighthouse was automated in 1963 and there was no longer a need for a lightkeeper.

The lighthouse tower itself is not thought to be haunted, but stories about strange happenings at Heceta House have been told for years, landing it on the list of the ten most haunted houses in the United States. The spirit of a lady nicknamed Rue, or the "Gray Lady" is reportedly the resident ghost of Heceta House.

Although no official records have been found of a child being born at Hecita Head the grave of an infant girl was found on Lighthouse grounds. Many believe that she might have been The Gray Lady's child and that is why she is hanging around. Rue has not only been known to move items, but to also set off fire alarms while workers paint, opens and closes cupboard doors, and she has been heard walking upstairs!

Nearly every resident since the 1950s has reported unusual incidents and those reports continue to this day. All of the incidents have been friendly; maybe sometimes mischievous. Although no official records have been found, there is a grave of an infant girl on the premises. Many people believe the spirit of the infant girl's mother still haunts the location, possibly watching over her little girl.

This lady ghost nicknamed "Rue" doesn't seem to like it when construction is done or changes are made to the buildings. Reportedly some volunteer workers had gone up to the location to do some painting and were spending the night. Through the night, the fire alarm kept going off. Even though no fire was discovered, the alarm continued to go off. After growing tired of being woken up by the sound of the alarm, they removed the battery, but to no avail. The alarm sounded yet again. Perhaps Rue didn't like the color of paint they were using?

Probably the most widely known incident reported at the Heceta House is that of a workman who came face to face with Rue in the attic. He was so startled that he fled the building and refused to go back into the attic. 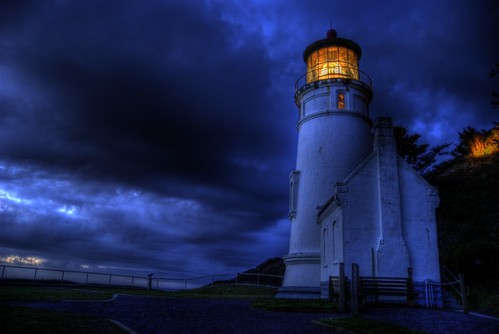 A few days later, he accidentally broke the attic window when he was working on the exterior of the building. Since he refused to actually go inside the attic, he repaired the window from the outside and the broken glass was left scattered on the floor of the attic. That night, workers reported hearing scraping noises coming from the attic. In the morning when they went to the attic to investigate, they found that the glass had been swept into a neat pile beneath the repaired window.

Rue has other ways of making her presence known including moving random objects, opening and closing cupboard doors, peering down at people from the attic window, and appearing as a smoky gray mist - thus the nickname "Gray Lady".

Heceta house is now a renowned bed and breakfast that has become so popular that there is a three-month waiting list for reservations. Both the lighthouse and the light keeper's house are listed on the National Register of Historic Places.